(ALBUQUERQUE, N.M.) April 29, 2011 — Rio Rancho's Tim Madigan can skip U.S. Open local qualifying this year by virtue of a No. 43 world amateur ranking. He was also one of five finalists for the Byron Nelson award. 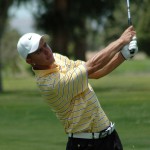 The USGA grants an exemption from local qualifying for the U.S. Open to the top 50 amateurs in the world, as defined by the World Amateur Golf Ranking jointly administered by the R&A and USGA. Madigan, a senior at New Mexico State University, was ranked No. 43 on the cut-off date, April. 27.

Madigan also was in the hunt for the Byron Nelson Award, to be announced May 3. Finalists are Cyril Bouniol of Abilene Christian, Georgia’s Harris English, Timothy Madigan of New Mexico State, Centre College’s Chris Morris and Pepperdine’s Andrew Putnam, according to the Golf Coaches Association of America.

A candidate for the Byron Nelson Award must be a graduating senior. The selection committee considers equally a nominee’s entire collegiate academic and golf career and his character and integrity while in college. Particular consideration is  given to a nominee’s good citizenship, as portrayed by Nelson over the course of his life and golf career.

Madigan recently won the 65th Western Intercollegiate and was the only player in the 92-player field to shoot par or better all three rounds, according to GolfStats.

Tucson Golf: Winter Golf without Spending Too Much Green 15806