The University of New Mexico Lobo men’s golf team clinched the Mountain West Championship title on Sunday as the team posted its best score of the tournament in round three to finish 33-under, 831. 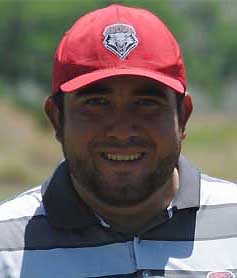 The win marks New Mexico’s seventh Mountain West title overall and first since 2014. Senior Sean Carlon and sophomore Galven Green were the top two finishers at the competition as the two Lobos tied for first individually at 13-under, 203. Carlon and Green went on to play three sudden death playoff holes to decide the individual champion and it was Green who claimed the individual crown with a five-foot putt.

The tournament win automatically qualifies the Lobos to compete in a NCAA Regional Tournament taking place on May 13-15. UNM will be one of 81 teams and 45 individuals that will compete at one of six regional championship sites with the low five teams and the low individual at each regional advancing to the NCAA Championship. The Lobos will officially find out where they are headed to on May 1 at 7 p.m. (MT) as the NCAA men’s golf selection show is set to air at that time on the Golf Channel.

New Mexico last competed at the regional tournament in 2017 as it earned an at-large bid to compete before making its way to the NCAA Championship where the Lobos finished tied for 26th.

On Sunday, Galven Green shot a third-round score of 67 (-5) with the help of six birdies to bring his three-round birdie total to a tournament-high of 18. The sophomore jumped up to second place in round two as he recorded his best score of the tournament at six-under, 66 before moving into first place in round three to sit even with his teammate Sean Carlon.

Sean Carlon led the competition in each round as he shot outstanding scores of 67 (-5) in round one followed by 68 (-4) in both round two and round three. The senior registered one eagle, 15 birdies and 35 pars across his three rounds, and he finished the competition tied for first in par-5 scoring at 4.17 (-10). Both Green and Sean Carlon averaged 2.92 (-1) in par-3 scoring to tie for second overall in the category.