Photos Capture Golf from the 19th and Early 20th Centuries

The USGA recently expanded its golf photography holdings with the acquisition of the Howard Schickler Collection – the world’s most significant private collection of original early golf photography.

The collection contains more than 1,000 high-quality, historically and artistically important golf images from the 19th and early 20th century. 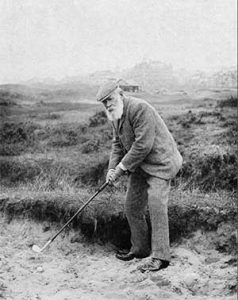 Old Tom Morris from the Schikler Collection st the USGA.

Many photographs feature top American and British golfers, both men and women, from the mid-1800s to the 1970s. The collection was amassed over decades by collector Howard Schickler, sourced from the collections of some of the game’s most influential figures, including the personal collections of Old Tom Morris and F.G. Tait, the Auchterlonie and the Foulis families, the estate of Billy Burke and the collections of Ed Dudley and Bernard Darwin.

Schickler’s love of golf began when he started playing the game at age 13 in New York City. As a longtime curator and dealer of fine art photography, Schickler brings a unique perspective to this collection.

“I have been mostly interested in the human story in all the collections I have personally built,” Schickler said. “The collection in many ways tells the story, and to the extent important photographs are dispersed in the marketplace, a cohesive story may be permanently lost. I tried to bring stability and credibility to the collecting part by assisting other collectors, historians and auctions… and it made the collection that I was building that much more worthy to stand the test of time.”

Although the USGA Golf Museum was already home to the largest and most significant collection of golf artifacts, library items, photographs and footage in the world, the images in the Schickler Collection critically augment the Museum’s holdings related to early women’s golf, early American golf and major tournament winners.

Highlights from the Schickler Collection

A selection of the photos from the collection have been digitized and can be seen on usga.org.

“It is vital that we continue to catalog golf’s greatest people, places and moments so that all those who love the game can draw inspiration from them,” said Hilary Cronheim, director of the USGA Museum. “The acquisition of Mr. Schickler’s photography collection ensures that this rich historical resource will be preserved for future generations to enjoy.”

The photographs add to the USGA Golf Museum’s collection of more than 750,000 prints, slides, negatives and digital images. The USGA’s digital photo archive contains nearly 375,000 images, including digitized files of original back-and-white images from the beginnings of golf and photography in the United States, as well as an extensive collection of contemporary images.

Each year, more than 15,000 images are added to the collection from the USGA’s championships and other assignments, as well as through Museum donations and purchases. These images are used to share the game’s rich story with audiences around the world.

The USGA Golf Museum is located on the campus of the USGA’s headquarters in Liberty Corner, N.J., with an extensive digital catalog that can be found at usga.org. The commitment to the preservation and celebration of golf history is part of the association’s mission to champion and advance the game and is funded in large part by revenue generated from the U.S. Open.