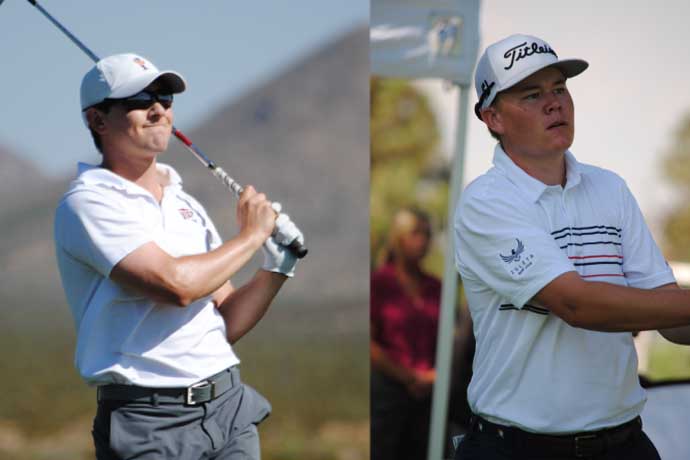 Greg Yellin of El Paso and Patrick McCarthy of the Duke City won spots in the US Amateur at the USGA’s US Amateur Local Qualifier in Albuquerque on Tuesday.

Yellin, a University of Texas at El Paso golfer, recently finished second at the New Mexico-West Texas Amateur Championship at his home course, the Red Hawk Golf Club in Las Cruces, led the qualifier field, shooting 66-70 to finish at 8-under.

McCarthy, who recently won the Albuquerque City Men's Championship, shot 71-69 to finish at 4-under.

After jumping out to a three-shot lead following the first round of the Albuquerque U.S. Amateur local qualifier, “Yellin put his game in cruise control following up an opening 66 with a 2-under par 70 during Tuesday’s final round,” said Dana Lehner of the Sun Country Amateur Golf Association, which ran the US Amateur Local Qualifier.

The Albuquerque US Amateur Local Qualifier had two qualifer spots. (Yellin is left, McCarthy is right in the featured image at the top of this post.)

Isaac Merry of Las Cruces and ex-Lobo golfer Gustavo Morantes, a native of Caracas Venezuela, ended T3 with two-day totals of 71-70, or 3-under.

Yellin and McCarthy will compete with 310 other elite amateurs from across the globe in the U.S. Amateur at Pebble Beach Golf Links and Spyglass Hill Golf Course Aug. 13-19.

The Albuquerque US Amateur local Qualifier was held at the University of New Mexico Championship Golf Course.

Here are the results for the top 10 finishers. The full leaderboard can be found at the SCAGA website.

Tucson Golf: Winter Golf without Spending Too Much Green 15959