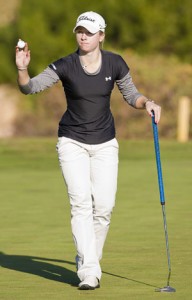 “I mean, fourth on the LPGA and now winning the LET; it’s a pretty good off-season if you ask me,” the Yorkshire, England, native said. “It feels good and I’m really looking forward to this year.”

The interview below was shot by us as she finished her Lobo golf career.