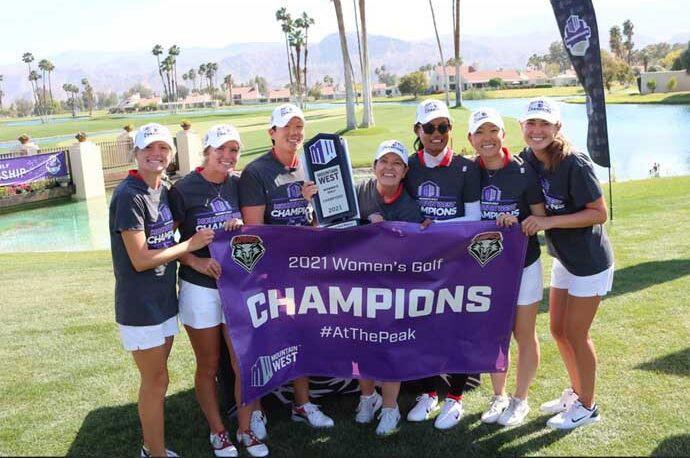 The University of New Mexico Lobo women’s golf team came from behind during the third round to win the 2021 Mountain West golf title. It was their ninth title, a conference record.

Sophomore Lauren Lehigh tied for first and ultimately fell in a three-hole playoff for the Individual Championship. She led a trio of Lobos to finish in the top six. She lost to Sara Kjellker of San Diego State in a playoff for the individual title.

The University of New Mexico women’s golf team victory marks the fifth under the tutelage of head coach Jill Trujillo, UNM’s first since 2014.

Winning the Mountain West golf title earns the Lobos a berth in the NCAA Division I Women’s Championship.

The Lobos posted a 15-stroke comeback to overcome an 11-stroke deficit following round two.

UNM trailed San Diego State before turning in their best round of the tournament on Day 3 with a team score of 2-over 290. marking a 10-stroke improvement from round one. The Lobo women topped the Aztecs by four strokes.

New Mexico was in second place by three strokes heading into the last eight holes, but made up ground and jumped ahead by one before taking a commanding, five-stroke lead heading into the final three holes.

Lehigh, who finished with a one-over total of 217, was followed by Napat “Jenny” Lertsadwattana who tied for fourth at 4-over after shooting a 76 in round one. She finished rounds two and three with a 72 in each and tied Lehigh for most birdies with nine. She also tied for second in par-5 scoring (4.67, -4).

Freshman Myah McDonald tied Lertsadwattana shooting a 73 in round one, a 72 in round two and a 75 in round three.

Seniors Serena Chon and Caroline Jansson rounded out the Lobo five and each stepped up to finish strong on Day 3.

At the end of regulation, Lehigh and Kjellker began a battle for the trophy with a playoff on No. 18. The match went three holes. On the final playoff hole, a par 3, Lehigh bogeyed and Kjellker dropped her par putt for the win.