Ramirez finished at 10-over, four shots ahead of Samantha Surette.

Ashlee Garrett missed a short putt on the 18th hole to fall out of a T2 with Surette, who carded a three-day total of 14-over. Garrett finished T3 with Shannelle Torres at 15-over.. 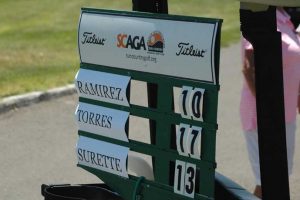 The final group’s leaderboard Through No. 17 of Day 3 of the 2019 New Mexico-West Texas Womens Amateur Championship.

Surette captured the Albuquerque Women’s Championship, which was played simultaneously with the SCAGA championship. That event is open only to women who live or work in the Greater Albuquerque Metro area

The two events were held at Twin Warriors Golf Club on Day 1 and at Santa Ana Golf Club on Days 2 and 3. Temperatures reached into the high 90s on the first two days and hit 100 during the final round.

“I nearly gave it away,” Ramirez told a friend in the gallery as she walked off No. 18 with the victory.

Naomi Ramirez Struggles with the Driver in Final Round

During the final round, Ramirez struggled off the tee, thanks to a driver that failed her repeatedly. She needed to hit a hybrid off many tees to find the fairway, she said.

“It was a little rough,” She told New Mexico Golf News after the round.

Her round was well on the way to ruin with a double-bogey on No. 10, the first hole on the Cheena Nine, followed by another bogey on No. 12. But just as it appeared to be slipping away for good, three straight birdies on Nos. 14, 15 and 16 righted the ship.

The 2019 New Mexico-West Texas Women’s Amateur is the first tournament Ramirez has ever won since taking up golf six years ago, she said.

Ramirez is a graduate of Loretto Academy in El Paso. At UTEP, she’s studying environmental science.

Full results of the New Mexico-West Texas Women’s Amateur, including the net flights, can be found here.