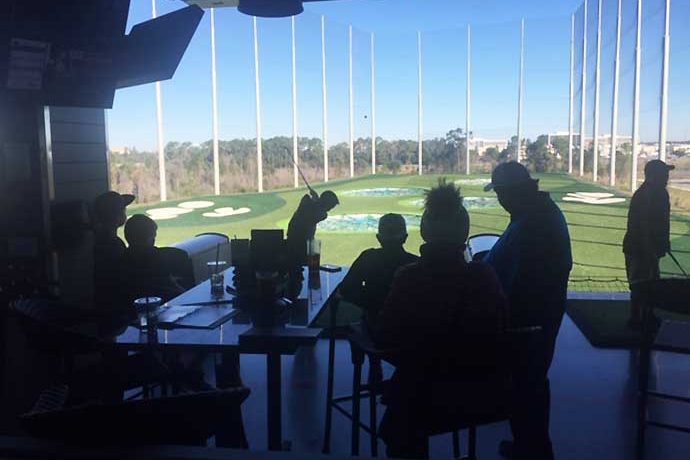 I have seen the future of golf in Albuquerque and I’m pretty sure it involves Topgolf.

Coming to Albuquerque some time later this year, Topgolf’s heated, partially open, multi-story driving range and entertainment center off Interstate 25 has the potential to introduce New Mexico families – adults, kids, even grandmothers – to golf in a way not seen since Tiger Woods burst onto the golf scene in 1996.

While in Orlando, Fla., for the annual PGA Merchandise Show, I attended a press event organized by the Solheim Cup featuring Madeline Sagstrom and Danielle Kang held at the Topgolf Orlando facility not far from International Drive.

As the two tour professionals fired laser shots onto the Topgolf range, I went exploring.

Admittedly, it was a holiday, Martin Luther King Day, but the place was crowded with kids, families, buddies and some Millennials clearly drawn by the party-like atmosphere, as evidenced by champagne bottles icing down in buckets within easy reach of the players. I guessed Mimosas, based on the time of day.

The three-story range has 100 climate-controlled hitting bays. The building is sensibly laid out. Visitors are greeted by a concierge on the middle level, before walking a few yards to the curved line of 33 hitting bays on each floor.

Off to one side of the entrance is a tavern, one of three bars on the property. There’s a sit-down restaurant that also serves guests in all hitting bays. Fixtures are high-quality, brushed aluminum, wood, glass or stainless steel. Each floor has a different type of non-golf game just off the hitting areas, including foosball, shuffleboard, corn-hole or Jenga block stacking.

There’s an HDTV in every hitting bay, plus more scattered throughout the building. There’s a rooftop terrace and fire pit. Staff are everywhere, filling orders, delivering drinks, cleaning up, bussing tables and providing overwatch.

The real action at Topgolf is in the hitting bays, where the same Toptracer technology you see on PGA Tour broadcasts records distance, apex, ball speed, ball height and ball curve on a HD monitor, making it instantly available to the guest and spectators after each shot. Then, will the poke of the butt of a club, another ball rolls onto the artificial turf hitting surface, and the cameras and computers reset to record the next shot.

Each bay has a colored-coded translucent sign above it, telling staff this bay is occupied, this one is vacant, this one is within 15 minutes of its allotted time, this one is ready to be cleaned for the next party. There’s an air of quiet efficiency to the whole affair. Background music can be heard on every level. Deejays are available for parties.

Amber Risner, a manager who recently transferred to Orlando from the four-level Topgolf facility in Las Vegas, the company’s largest, walked me through the Orlando facility.

Pricing, she said, is as follows: $30 an hour per bay until noon, $40 an hour from noon to 5 p.m., and $50 an hour from 5 to closing. Each bay can hold six participating players. Maybe two more non-participating guests can watch, although, like a bowling lane, there’s only so much room before it gets too crowded or unsafe.

Players aim at targets with lighter-than-standard, slightly flight-restricted balls designed to minimize chances that shanks leave the high nets surrounding each Topgolf facility. Sensors detect whether a shot hits any of the depressed net-lined targets scattered across the artificial turf-covered range. Players can compete as individuals or teams using their own or Topgolf-supplied clubs.

From what I saw, there’s nothing like the body-shaming that keeps neophytes from gyms or the intimidation that newbies face walking onto most golf courses. Your bay is your bay. Your crew is your crew. What happens over there, well, we’re having a good time over here.

In my hour or so at Topgolf Orlando, I cruised bays with families, with tweens clearly on a track to play elite golf being coached by parents, one bay away from people who were lucky to hit the ball. Non-golfing mothers were cajoled into having a swing. Grandparents sat back sipping drinks. Those Millennials were clearly into each other and the champagne.

The Topgolf project at the site of the long-dormant Beach Water Park site southwest of the intersection of Montano Road and I-25, has received the blessing of both Albuquerque and Bernalillo County.

A total tax-forgiveness incentive of $4.3 million was approved by both entities, although the Albuquerque City Council had to override Mayor Tim Keller’s veto to approve the city’s share of that. The hope is that Topgolf generates 200-plus full- and part-time jobs, plus gross-receipts taxes. The Orlando facility employs 325 full- and part-time employees, Risner said.

Morgan Schaaf, a Topgolf corporate spokesperson in Dallas, emailed that she could not immediately answer questions about the proposed Albuquerque Topgolf opening date or the progress of construction.

Big Shots Golf, an Illinois-based company, beat Topgolf into the Albuquerque market in terms of announcing a proposed Albuquerque location, but that company did not seek tax incentives. Approval of Topgolf’s incentive package likely sealed the fate of that project, which was to have been built on the main east-west road into the Balloon Fiesta Park west of I-25, which is perhaps the most heavily trafficked road per square foot in Albuquerque each year during the first week of October.

So many initiatives haven’t worked. Even the so-called “Tiger Effect” in 1997-2000 faded as people realized how hard the game can be.

The PGA of America, which represents the golf pros of America, appears to have an unwritten agreement with Topgolf to hire PGA pros at their facilities. If true, that removes a main obstacle to local acceptance of Topgolf among the golf-pro community in the Sun Country PGA Section and by extension, among local golfers.

What it All Means

Anyone who sells Topgolf short should do so at their own risk. The Topgolf competition-themed “Shotmakers” show on the Golf Channel that debuted April 9-10, 2018, drew 1.2 million viewers. According to the website BroadwayWorld.com, a site mostly devoted to theater news, it recorded the youngest demographic of any cable news debut since 2016.

The takeaway: Topgolf melds golf, family entertainment, dining and non-golf entertainment  in a well-managed, climate-controlled environment, plus craft brewing, foosball and the like in a non-intimidating setting. It’s about fun.

If some kid discovers he or she likes striping the ball and watching it tracked by hi-tech equipment just like the pros and decides to pursue the game on a local green-grass golf course, what’s not to like?

Dan Vukelich, editor of New Mexico Golf News, is a member of the Golf Writers Association of America and the Golf Travel Writers of America. Reach him at dan@newmexicogolfnews.com. He is reporting this week from the PGA Merchandise Show in Orlando.