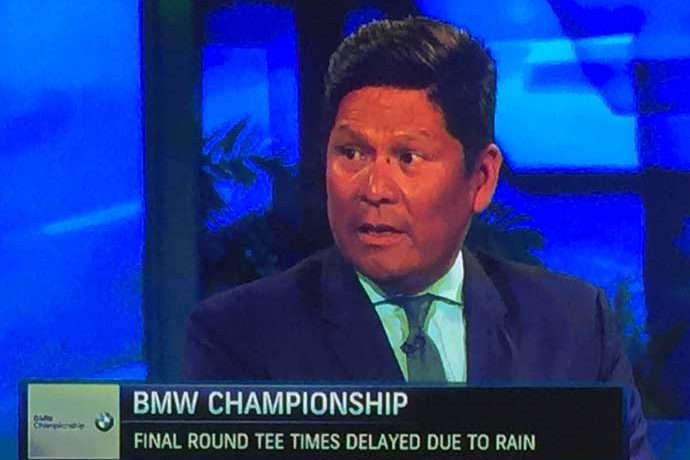 No Charge for Golf Spectators

Local golf fans will get a chance to see Golf Channel commentator Notah Begay III tee it up at Sandia Golf Club at the New Mexico Open .

Notah Begay, a four-time winner on the PGA Tour, will go off No. 1 at 2:10 p.m. Tuesday with Zachai Brown, a Web.com Tour player from Golden, Colo., and Steve Manning, tournament director at Santa Ana Golf Club.

The three players will have the same tee time on Wednesday for the second round of the 54-hole event.

Organizers of the event at the Sun Country PGA Section also paired two groups of notable local players who may be of interest to local fans. There is no charge for spectators to walk the course.

Ex-Lobos Wil Collins and Sean Carlon along with LatinoAmerica Tour player Tyler Torano of Chula Vista, Calif., go off of No. 1 at 1:20 p.m.

Ex-Lobo Samuel Saunders of Albuquerque, now playing on the LatinoAmerica Tour; and David Muttitt, a teaching pro at Los Altos Golf Course; and former PGA Tour and Web.com Tour player D.J. Brigman of Albuquerque go off No. 1 at 1:30 p.m.

There are 20 New Mexicans in the 72-player field. See all tee times and pairings here.

Notah Begay, of Los Ranchos, who attended and played golf for Albuquerque Academy, was a teammate of Tiger Woods at Stanford University. Begay is one-half Navajo, one-quarter San Felipe and one-quarter Isleta. He is the only full-blooded Native American to have played on the PGA Tour.

Begay currently is a commentator for the Golf Channel and most recently was calling the action at the rain-plagued BMW Championship being held outside of Philadelphia.

Notah Begay was named one of Golf Magazine’s Innovators of the Year in 2009 and has also been named one of the Top 100 Sports Educators in the world by the Institute for International Sport. He owns a golf course development company, NB3 Consulting, and works with Native American communities to develop golf properties, according to his Wikipedia profile.

Begay suffered a heart attack in 2014, while practicing on the putting green at Dallas National Golf Club. He was quickly taken by ambulance to Dallas' Methodist Hospital and a stent was placed in his right coronary artery.

Previous ArticleWanna Be a Golf Writer Intern?Next ArticleNew Rules for Golfers 60-plus?
newmexicogolfnews
Dan Vukelich, former editor of ABQ Free Press and Sun Country Golf magazine, is editor of NewMexicoGolfNews.com. He is a member of the Golf Writers Association of America and the Golf Travel Writers of America. Reach him at [email protected]

Tucson Golf: Winter Golf without Spending Too Much Green 17329

Phoenix’s West Valley Gets a Winner with Victory Club 4080